Loki / Loki Prime is my favorite Warframe for Spy missions. Loki is able to remain cloaked longer than any of the other stealth warframes (Ivara, Ash, Octavia) and he is also able to sprint faster, making missions more efficient/faster.

Loki is very useful for Kuva Fortress missions as he is able to sprint by enemies and cameras/lasers/turrets while cloaked. He is also very efficient for certain Sortie's where you can sprint to the mission target undetected, finish the mission and exit quickly without wasting time fighting the guards.

However, Loki has low armor and health so stealth is the best way to keep him alive - make sure to bring some Energy Restore's so you can spam your Invisibility when ever there are nearby guards. 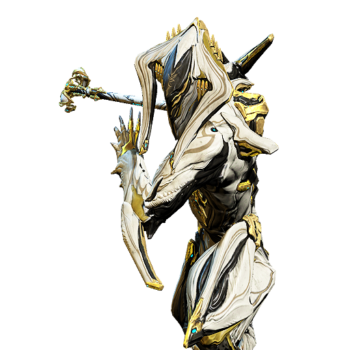 How to get Loki

Loki's compont blueprints drops from The Hyena @ Psamathe on Neptune (LV 30-32). The drop chance is fairly high so it shouldn't take long to acquire all three blueprints. The main blueprint is bought at the market for 35.000 credits.

The relics that drops blueprints for Loki Prime are currently removed from the drop tables and have been moved to the "Prime Vault". They will likely be unvaulted again at a later date - pay attention to news on the official Warframe site for information of which warframes gets unvaulted next time. You can however still acquire those blueprints by trading with other players (for Platinum) who already possess those blueprints.

1: Decoy places a copy of Loki at the targeted location. It will make some noise and attract the guards attention so they hopefully don't shoot at you. The Decoy works fine as you are leveling but it has very low health and will quickly be destroyed by high-level enemies. Only one Decoy can be active - if you cast this ability again while a Decoy is still active, the first Decoy will disappear.

Notice: A Decoy + Switch Teleport is an effective combo for quickly getting out of harms way or get into a difficult to reach location.

2: Invisibility will make Loki invisible and untargetable. Sounds will be muffled slightly but enemies will still try to attack you if they hear gunfire.

The duration of Invisibility can be modded with Ability Duration.

The cast range can be modded with Ability Range.

4: Radial Disarm will force all enemies within range to drop their weapons permanently - they can however still use melee attacks.

A group with a Loki + Limbo can be very powerful in a Defence type mission: Limbo casts his Cataclysm + Stasis to protect the mission target, Loki cast Radial Disarm to force enemies to drop their weapons and run into melee range, where they will freeze due to Limbo's Stasis and can now easily be killed.

Saviour Decoy augments the Decoy ability and protects Loki against fatal damage as long as the Decoy is active.

Hushed Invisibility reduce weapons noise by 100% - this is highly recommended for stealth builds and will allow you to take out guards with e.g. a powerful sniper riffle without making any noice!

Safeguard Switch is an augment for Switch Teleport that will make an ally invulnerable for 6 seconds after being switch teleported by Loki.

Irradiating Disarm is an augment for Radial Disarm that will afflict the enemies within range with confusion.

This build focus on stealth gameplay - it focus on max duration of the Invisibility ability and having plenty of energy to recast it when needed. With the Energy Siphon + Coaction Drift you will passively generate enough energy to recast Invisibility whenever it times out. However, you can switch the Coaction Drift for any other Exilus mod you prefer.

I use this build with my Vectis Prime sniper rifle and the Hushed Invisibility augment allow me to kill enemies without alarming nearby guards. You can however equip a silent weapon like a bow or throwing knifes instead or only use your melee weapon and then use this mod slot for whatever you like.