Rhino or Rhino Prime has a very useful toolkit with a good mix of survival, crowd control and DPS. Rhino is great as tank - actually one of the best tanks in the game; his Iron Skin ability will allow him to survive damage that would certainly kill most other warframes.

Rhino is a very useful for carrying index points in The Index as the Iron Skin will keep you alive even when you are out of energy (just rememember to keep an eye on how much is left and be prepared to find an energy restore to recast it).

Rhino is also a great warframe when learning how to deal with the Eidolon bosses - not only will your Iron Skin help keeping you alive longer, but the Roar will also give a DPS boost to the team making the fight faster and easier.

For certain Sorties Rhino is also a great choice, especially if you have trouble surviving with other Warframes.

I highly recommend you acquire Rhino as soon as possible and start collecting relics for Rhino Prime also. 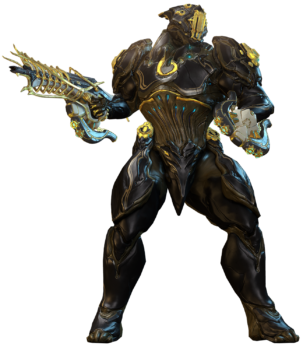 How to get Rhino

Rhino's component blueprints drops from The Jackal @ Fossa on Venus (LV 6-8) with a decent dropchance (22.5 for Systems, 38.7% for Chassis and Neuroptics) so it is easy to acquire for new players. The main blueprint can be bought at the market for 35.000 credits.

The relics that drops blueprints for Rhino Prime are currently removed from the drop tables and have been moved to the "Prime Vault". They will likely be unvaulted again at a later date - pay attention to news on the official Warframe site for information of which warframes gets unvaulted next time. You can however still acquire those blueprints by trading with other players (for Platinum) who already possess those blueprints.

1: Rhino Charge cause Rhino to charge forward and damage and CC all enemies in his path.

Augment: Ironclad Charge will temporary increase Rhino's armor for each enemy hit in the charge.

2: Iron Skin protects Rhino against damage - it is sort of a a super powerful shield. This ability is what makes Rhino a great tank and almost impossible to kill. The Iron Skin scales with the base health of Rhino and his current armor (scales with Armor mods). For a short period after casting Iron Skin, Rhino is invulnerable. Any incoming damage while being invulnerable will be converted to health and thus boost the Iron Skin.

Use Ability Strength and Armor mods to make the Iron Skin stronger.

Augment: Iron Shrapnel allows you to detonate your Iron Skin dealing damage to nearby enemies and then recast your Iron Skin to get it up to 100% again. This is a great mod for keeping you alive, as you can easily get your Iron Shield back to full power whenever you need to (as long as you have enough energy) instead of waiting for it to be used up entirely.

3: Roar will boost the Rhino and nearby team mates damage for 30 secs. When hunting Eidolon bosses, this is very useful for nuking the limbs and killing the boss as soon as the shield have been removed. Just remember to stay close to your team mates so they will also get a DPS buf. Roar stacks nicely with the crit damage multiplier you get by shooting through Volts shield, so try staying close to Volt if you have one on your Eidolon team.

Augment: Piercing Roar allows Roar to be recasted and cause Rhino to inflict Puncture procs and knockdown enemies.

4: Rhino Stomp will cause all nearby enemies to be thrown into the air, where they are slowed for a short time. Rhino Stomp also deal some Blast damage.

The Damage scales with Ability Strength. The Range and Duration are affected by Ability Range and Ability Duration mods.

Augment: Reinforcing Stop will replenish the Iron Skin with 80 health points for each enemy by the Rhino Stomp.

This build is work-in-progress but it currently works great as it is. It focus on making your Iron Skin as strong as possible and also make it easy to keep it up all time so you can carry all those precious index points without being killed. With this build I have an Iron Skin with 8.148 health. If taking damage while casting Iron Skin it will typically be buffed to more than 10.000 health. With more Forma and mod upgrades the Iron Skin can become even stronger.

The Iron Shrapnel augment mod is very useful in The Index as there are plenty of energy restores scattered around the map; if your Iron Skin is getting low, pick up some energy and quickly cast Iron Skin twice to detonate the old Iron Skin and apply a fresh new strong Iron Skin.

To speed up killing enemies you need to know where they are - for this reason this build include the Enemy Sense mod as you can't equip companions (otherwise I would prefer using e.g. Animal Instinct on my companion to free up a mod slot on my Warframe for some more useful mods.

Btw, I usually equip a similar build when running Sorties, however I exchange the Enemy Sense mod with the Intruder mod in order to hack terminals quickly.